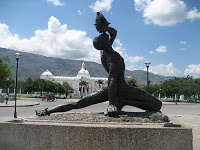 Right after the Haiti earthquakes, Kevin Powell and I organized several Help Haiti events and this one in particular was early April 2010. As a co-organizer of the community forum, I was supposed to arrive early to help set up. I was running late and wasn’t very happy about that.

I hustled from the train station to the Brooklyn Historical Society where the event was being held and for no reason at all, the well-being of Marie Eusebe (a good friend from my college days at Howard University) came front and center. “I wonder how Marie is doing?” The second question was “Where the hell did that random thought come from?” I had not seen or talked to Marie in at least 5 years. So I paid no attention to this peculiar sense and continued to rush to the venue.

I checked in with everyone, and everyone was on point: my team had set up the sign in/info table, the co-organizers were handling their responsibilities, the media crew was setting up, and all was going reasonably well. That gave me a moment to go to the ladies room, get my head together, relax my shoulder, and mediate on the people of Haiti. As a co-organizer and panelist, I needed a space where I could de-program and review my notes.

At some point, another woman either walked into the bathroom or came out one of the stalls. Because I was totally in my own head, I didn’t zone in on her, but the moment I lifted my head to fix my face in the bathroom mirror, she called my name, “April Silver?? It’s Marie Eusebe!!”

I stared at her in disbelief. How is it that I think of her just moments ago and she appears? In the ladies room, no less, I wondered.

To make matters even more phenomenal, she said “You are not going to believe this, but you ran across my mind the other day. Out of the blue…and now I see that you’re doing this panel. How weird is that?”

I go on to tell her that for no apparent reason at all, her spirit came to me in the form of a question, as I was rushing from the subway. We spent the next few minutes marveling at the power of spirit and the realness of how connected we are. We were both amazed, but not fully. Actually, she and I shared thoughts on how our spirit selves have a way of getting what they need from our human shells, whether it makes sense to us or not.

Today, on the eve of the anniversary of the earthquake that devastated Haiti this time last year, I’m not thinking about – at least for this moment – all the political turmoil, the fraud, the exploitation, the disease, nor the chaos that has gripped the great island nation of Haiti. Instead I’m meditating on the hundreds of thousands of people of African ancestry who, in a matter of minutes, made their transition when the forces of nature shook the earth. In a matter of minutes, Haiti became the center of the world and, by and large, the focus was all wrong. The public and media chatter talked so much about what Haiti wasn’t. Added to the conversation must be a loud amplification of what Haiti is and has always been. That conversation need not solely focus on an economic context. We, as human beings, are more profound than that one dimension.

Too quickly, Port-Au-Prince became a mass sacred burial ground, yet there is a message in that. We are reminded that spirit will take what it needs from this side in order to restore balance, in order to get us moving in the right direction. It’s not a hard conclusion at which to arrive: The depth of devastation in Haiti, currently and throughout history, runs parallel to the gross injustices that she has endured, both from her so-called neighbors and from within. And spirit will not let us forget. Spirit will pull at us and show up in our lives until we restore balance…and get us moving in the right direction.

Tomorrow (January 12), Ms. Eusebe, who is from Haiti, is co-presenting a very special event at the Apollo Theater. The “Hope and A Future: A Benefit Concert for Haiti” will feature music, dance, and spoken word, but it is also a practical, responsible, direct line to offering relief to people in Haiti who have been terribly affected by the earthquake. AKILA WORKSONGS, Inc. is a Community Partner for this event. The Community2Community website explains it all: www.Community2Community.info.

Haitians are a resilient people and they have a lot to teach the world. There is a way to listen and demonstrate support in a way that is respectful and meaningful. Learn more via the Community2Community organization and join us tomorrow at The Apollo.