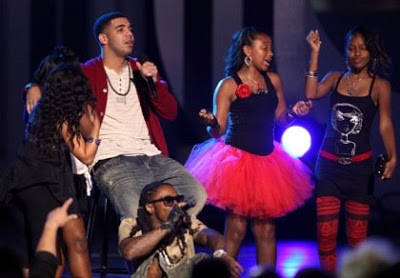 Last night, live at the BET Awards in Los Angeles, a room full of head-bobbing, consenting adults bounced to Drake and Lil Wayne’s back-to-back performances of the hit songs “Best I Ever Had” and “Every Girl.” I watched, underwhelmed. I wanted more “Michael” in what was supposed to be this award-show-turned-Michael-Jackson-tribute. I watched, ever puzzled by the Lil Wayne phenomena that has captivated the music industry. I watched, wondering when the set was going to end.

Then the little girls came onstage…literally the little girls. “Are those children?” I asked out loud, in disbelief. Then the camera panned the audience. Everyone was still head-bobbing as the little Black girls huddled around these superstars.

“Are those little girls on stage…for this song?!?!” I, still in disbelief, lost breath and forced myself to exhale. “Why are these little girls featured on this performance? Is somebody going to stop this?” Again, the show was live, though for a nano-second, I was hoping that a hunched-over stage manager would bust through from back stage to scoop up the children, rescuing them from harm’s way…from being associated from this song. But instead, what those girls witnessed from the stage was hundreds and hundreds of adults (mostly Black people) staring back at them, co-signing the performance. These girls, who all appeared to be pre-teens, were having their 15 minutes of glam on one of the biggest nights in televised Black entertainment history, with two of pop culture’s biggest stars at the moment, with millions of people watching. They must have been bubbling with girlish excitement, shimmering like princesses all night. Pure irony: one of them wore a red ballerina tutu for the special occasion. And we applauded them.

But did no one care that Lil Wayne’s song Every Girl is about grown men and their sexual escapades with women? Did the meaning and intent of the song matter to anyone, this song whose hook and other lyrics required a re-write in order to get air play? “I wish I could love every girl in the world.” That’s the radio-friendly version of “I wish I could f–k every girl in the world.” But Lil Wayne’s BET performance was the clean edit of the song. Perhaps he (and the show producers) thought that there was nothing wrong in featuring the children in the clean version. Perhaps we were supposed to see the whole bit as cute and innocent. Absolutely not. There’s no other way to cut it: in presenting little girls in a performance of a song that is about sex, group sex, and more sex, BET and Lil Wayne set the stage for child pornography. It doesn’t matter what version of the song was played, much like a man who batters women is still an abusive man, even if uses flowery phrases while battering.

In the song, Lil Wayne mentions superstar Miley Cyrus, but Cyrus gets a pass on this lyrical sex escapade because, as he acknowledges, she is a minor. Huh? Why, then, is he comfortable with featuring four minors, these four little Black girls, in the show? How deep exactly is this inability of some men to respect women, and how deep is Lil Wayne’s disregard for the safety of little girls?

I’m told that one of the girls is Lil Wayne’s daughter. That doesn’t matter. In fact that makes it worse. Last night we were reminded that there are few safe spaces for our little girls to be children; that some of us are willing to trade their innocence for a good head nod. BET and Lil Wayne are beneath low because, in effect, they have given premium assurance to these and other little girls that their best value, their shining moment, their gifts to display to the world, all lie within a context that says they are f**kable.

The programming at BET has been heavily criticized by artists, concerned citizens, college students, parent groups, social justice organizations, media reform activists, and many others for over a decade now. Their programming seems hell bent on broadcasting the worst pathologies in the Black community. Some have joined the anti-BET movement by simply tuning out. Others have been more pro-active. National letter-writing campaigns and other activities designed to shame and/or pressure the network into improving its programming have been in play for some time now. Boycotts have been called as well. Two years ago, for example, the network found itself in the line of fire as it planned to air the very controversial series “Hot Ghetto Mess.” Advertisers, such as State Farm Insurance and Home Depot, responded to pressure and requested that their ads be disassociated with the series (though, their ads could be placed in other programming slots). None of this has made a difference. In fact, it seems to have emboldened the network, for it is now expanding. In the fall, BET is due to launch another channel.

As a social entrepreneur and activist, my entire life/work has been dedicated to standing up for what’s right, especially within the culture of hip hop. When identifying what cancerous elements exist within the Black community, many fellow activists agree with Chuck D (of Public Enemy), and even Aaron McGruder (of The Boondocks), when they targeted BET as one of those elements. That said, I didn’t think that we would ever have to take the network to task for what amounts to child pornography.

But millions of Black people are not offended by the network and welcome anything BET has to offer, no matter how much it continues to unravel the fabric of our community. Imagine, if you will, BET as a human being and the viewers as the community. You would have to imagine BET as a drug dealer, with his swag on…perhaps outside standing atop a truck, the community crowded beneath him. Imagine him throwing nicely wrapped gifts into the crowed, or giving away turkeys at Thanksgiving. Or maybe it’s Mother’s Day and he buys dinner and teddy bears to all the single moms and grandmothers around the way. Despite his best efforts and despite the approval of his fans, he is still a drug dealer, pimping death to the masses.

Proverbs is full of sacred text that teaches us that there will always be fools amongst us. Some of them will be highly paid, protected, and given world-wide platforms to show off what they do best. And these fools (be they performers, corporate executives, or others), will have fans and loyal supporters, and a place to call home, like a BET.

But as long as there will be fools amongst us, there will also be wise ones – a small group of people concerned about the long term health and well being of the community. This small group will often go unheard and they will be outmatched. They will struggle over which problem to address first: the child pornographer, the batterer, the pimp, the prostitute, the thief, the slumlord, or the system that enables it all. They will get tired and their defense will pale in comparison to the almost crushing offense. And they will be betrayed from within. Historically and universally, this is what happens in the struggle for what is right. But eventually, with continued pressure, something will shift. A radical new thinking will emerge, and the fools will lose their stronghold.

The sure expectation of victory, however, can not be understated. It is a concrete ingredient in the struggle against the death that is being paraded in our community…as necessary as letter writing campaigns, economic boycotts, symbolic and actual protests, and other pressure-oriented activities. It is indeed possible to bring more life into our community.

NOTES ON HOW TO RE-POST OR RE-PRINT THIS ARTICLE. YOU MUST…
1. List the copyright info as: © 2009 by April R. Silver or Copyright 2009, by April R. Silver
2. Include this entire blurb directly under the article: “April R. Silver is a social entrepreneur, activist, and writer/editor. She is also founder of the communications agency AKILA WORKSONGS, Inc. Her first book is the critically acclaimed anthology “BE A FATHER TO YOUR CHILD: REAL TALK FROM BLACK MEN ON FAMILY, LOVE, AND FATHERHOOD.” Contact Info: silver@aprilsilver.com or www.aprilsilver.com“

11 thoughts on “Beneath Low: BET, Lil Wayne Set the Stage for Child Pornography”