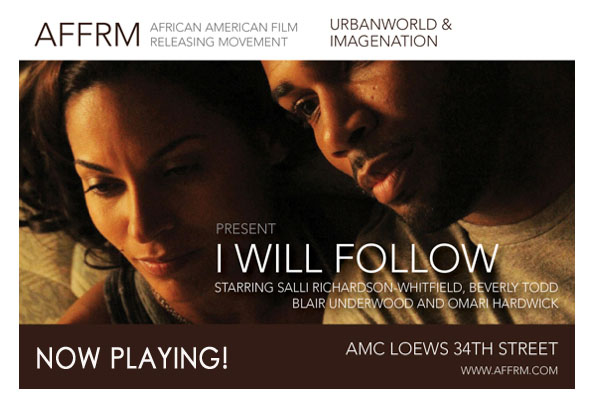 I am happy to make this special announcement about the film “I Will Follow” and the fact that I’m hosting a screening THIS SATURDAY in New York City at 6pm (all details below).

April R. Silver of AKILA WORKSONGS, Inc.
to Will Host a Screening of the Film
I WILL FOLLOW
March 19, 2011 (THIS SATURDAY)
at the 34th Street AMC Theater
in New York City

Silver is proud to support the efforts of ImageNation and Urbanworld in presenting the New York City theatrical release of the critically acclaimed film “I Will Follow,” starring Salli Richardson-Whitfield, Omari Hardwick, Blair Underwood and Beverly Todd.

*ABOUT THE FILM*
Maye (Richardson-Whitfield) is a success. Hot career. Hot boyfriend. But when her world is turned upside down by tragedy, she must struggle to keep her balance. “I Will Follow” chronicles a day in the life of a woman at a crossroads, and the twelve people who help her move forward into a brave, new world.

“I Will Follow” is written and directed by 2011 NAACP Image Award nominee AVA DuVERNAY.

ABOUT AFFRM:
AFFRM’s mission is to foster and further Black films through theatrical distribution beyond the studio system, powered by the nation’s finest African-American film festival organizations. For more information, visit www.affrm.com