“Our entire experience is an African experience … there is a distinct African character that admonishes us to shun hypocrisy born of egocentrism and greed and the lust for power and control, that encourages us to move forward together so that in harmony with the world around us, with creating itself, we can perfect and enjoy a more perfect society.”

On December 19th, a dear friend shared that CHIEF BABA LLOYD WEAVER had made his transition. I have been reflecting on our brief friendship ever since.

It was only in 2017 when I first had the honor of meeting this giant of a man. I had heard of him for decades prior. By the time we met, he had just returned home to the United States (in 2015) after living in Nigeria for about three decades. Prior to our meeting, for several years, a few people had approached me about how great they thought it would be if I would one day meet Baba Lloyd and help him with his many media and book projects. I have a privileged history of rocking with a number of living legends (which is my heart’s delight) so I could see how folks would think that I should be connected with Baba Lloyd. Plus, I’m an “old soul” who never tires of sitting at the feet of elders. So whenever the topic came up and I would humbly agree with these mutual friends of ours. If I ever had the chance to meet the legendary Baba Lloyd Weaver it would be a blessing, I assured. If ever.

I don’t remember precisely when or how the phone conversation came about but it was a lovely one. It was lovely AND I was not prepared for what he ended up telling me about his family lineage. Just as casually as the day is long, Baba Lloyd shared that he was the great-great-grandson of Frederick Douglass. For a moment, I stopped breathing. All the keys in the doors of my life unlocked in harmony with the sound, weight, and meaning of those words which had just landed in my material world.

Frederick Douglass? Bloodline? On my phone? In my ear? WHAAAAT?

There was barely a thought in my head when he said “… great-great-grandson of Frederick Douglass…” Certainly, there were no words on my tongue. My ears were ringing, though. I didn’t cry but my eyes were starting. I did my best to fully pay attention because he was going in with the family stories. I managed to stay focused, but my spirit was charged and soaring through space and time.

Intellectually, I understood the conversation and I was listening, fully fascinated. In awe, I listened to him talk matter-of-factly about his lineage: the annual family trips that he remembered from childhood when his family would go to the White House as the special guest descendants of Frederick Douglass; the newspaper articles that recorded the family tree; the family lore that was treasured by the Weavers, the Douglass, and the Sragues. And he spoke, rather passionately, about Anna Murray Douglass, the unheralded backbone of the great abolitionist. In fact, he was a bit more interested in talking about Mrs. Douglass than anything else. He clearly longed for people to understand just how vital she was to the abolitionist movement.

At some point in the conversation, I summonsed enough nerve to ask if I could, at no cost to him, present a public program featuring his family story. The timing would be ideal because the bicentennial of Mr. Douglass’ birth was a few months away and former President Trump had already made his ignorant statement about Douglass, which catapulted the iconic Black leader back into the spotlight more than a century after his death in 1895.

Everything in me wanted to escort Baba Lloyd’s story to the world. Deep down in my bones, I knew this was my program to gift to the community. This is my work. Baba Lloyd, Frederick Douglass, and Anna Murry Douglass were the ideal focus for Black History Month 2018. There are as many ancestral stories to tell as there are leaves to pick from on every tree, shrub, or flower on planet earth but THIS story unfolded in my lap and I couldn’t wait to honor it. 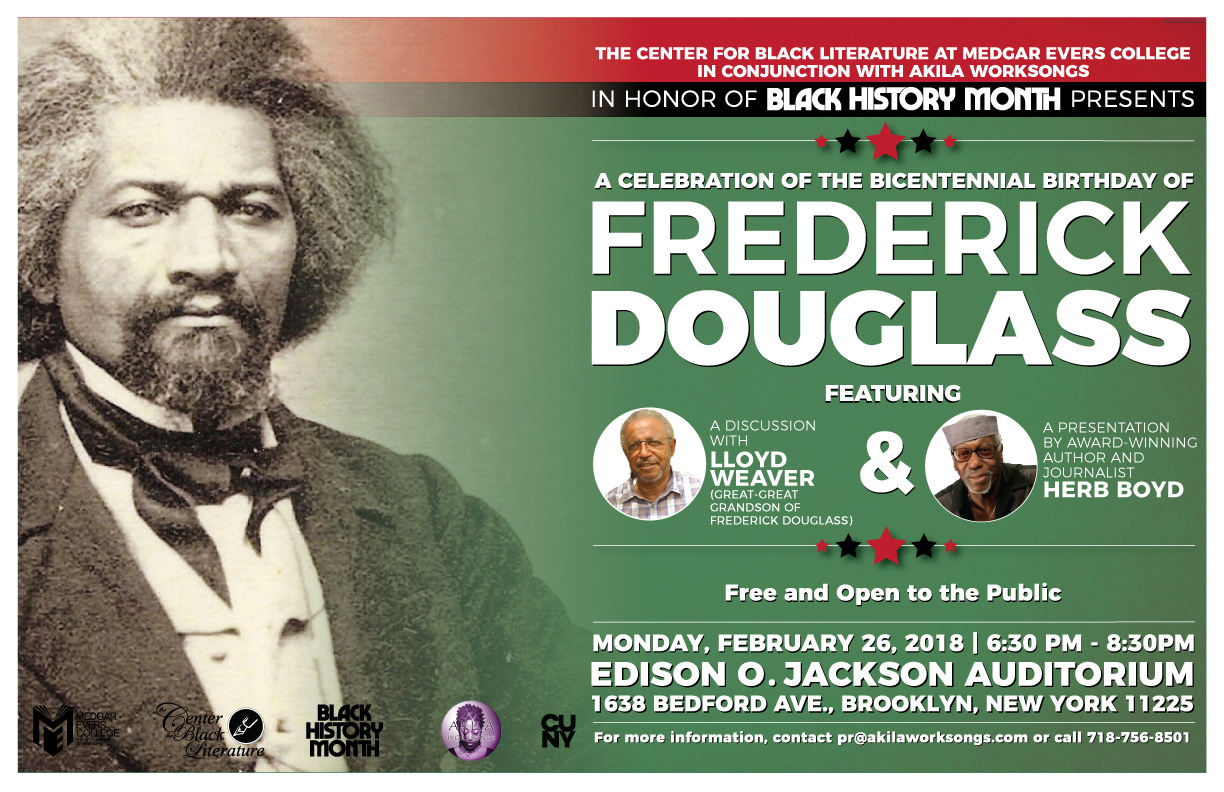 Months later, on February 26, 2018, at Medgar Evers College in Brooklyn (where Baba Lloyd was living at the time), I presented a public program celebrating the life and legacy of Frederick Douglass as told via his great-great-grandson. I bought in the Center for Black Literature (because, of course, storytelling is oral literature is Black literature) and its founder, Dr. Brenda M. Greene, bought in best-selling author and historian Herb Boyd to give opening remarks and historical context. I asked Dr. Greene, as executive director, to interview Mr. Weaver and I gave welcoming remarks. Baba Lloyd went on to talk about little-known anecdotal gems from the Douglass family and about traditional African spirituality and Orisa (he was an internationally renowned initiate of Yemoja and is the forefather of one of the largest African American Orisa houses in the United States). He also talked about living in Nigeria for nearly 30 years as a film producer. And if you have ever connected with Baba Lloyd for more than five minutes then you know that he talked intelligently about social and racial justice imperatives and what we can do to build a more perfect society. All of this was wrapped up in his addressing the life and legacy of Anna Murry Douglass and Frederick Douglass, who, by the way, Baba Lloyd assured us, was more pro-African than most knew. More illuminating than that was the moment when Baba Lloyd discussed the ways in which Douglass protected himself from and upon which tools he relied upon in his escape to freedom. Isese Lagba!

Oloye, may you live well in the ancestral realm. The honorable things you have done while you were here are plenty. You left behind words of wisdom, books on African spirituality, as well as lessons and cautionary tales that will improve our lives. A dupe ooo. May we never be separated from your light.

Oloye (Chief) Lloyd Weaver was a journalist, film director and producer, and media activist. Born in Washington, DC but raised in Harlem, New York, he studied journalism at Kent State University and Columbia University and worked at WCBS News and CBS News as a researcher and eventually as a producer. He worked on such prestigious programs as the CBS Evening News, The Morning News, Sunday Morning, 60 Minutes, and other programs. He also taught at the New York Institute of Technology. In February 1982, taking a leave of absence from CBS, Lloyd joined a group of television specialists to create a training program for their professional counterparts at the Nigerian Television Authority (NTA). In 1984 Nigerian advertising agencies contracted Lloyd to produce TV commercials and other promotional materials leading to the formation of one of Nigeria’s first independent television production companies. Between 1985 and 2000, Lloyd produced and directed over 400 television spot commercials, many winning significant awards for himself and for his clients.